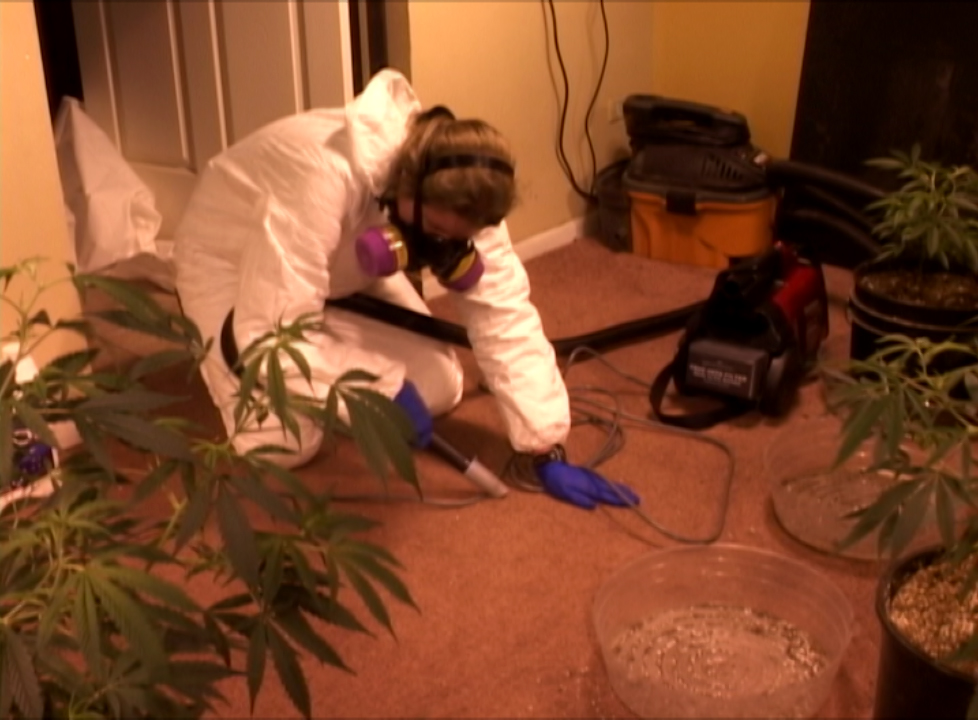 Living with a greenhouse in your house is hazardous to your health — so hazardous that adults who expose children to such an environment are guilty of child abuse, John Martyny of National Jewish Health and an associate professor for the University of Colorado Denver said Sept. 10.

Martyny, working at the request of Colorado law enforcement agencies, led a research team that conducted environmental tests of 30 indoor marijuana grow operations in Denver. Of the grow operations tested, 20 had a “medical marijuana component,” and at least two were supplying medical marijuana dispensaries, authorities said. Researchers found such extreme levels of mold and spores in the homes, commercial offices and warehouses they tested that petri dishes and field-testing equipment “topped out” and couldn’t record the unexpectedly high levels, Martyny said. You can read the study’s findings here.

(Martyny’s) research showed that in residential and commercial structures, it was difficult to control chemical contamination from pesticides and fertilizers. The study also showed that plant irrigation resulted in increased moisture that could damage building material, result in excessive mold growth and pose a risk of fire and electrocution. The study shows that highly-elevated airborne levels of mold spores within these structures subjected occupants, emergency personnel and other individuals to significant potential health hazards. Potential health effects include hypersensitivity pneumonitis, allergic rhinitis, asthma and other respiratory diseases. Another concern was elevated carbon dioxide levels which, if generated using fossil fuel combustion, can result in the production of carbon monoxide resulting in significant health effects, or death, to exposed individuals.

As for those “other individuals” cited above, count unsuspecting neighbors and office workers — and renters and homebuyers — among them, Martyny said. Again, from the press release, the study shows

… others may be impacted as well, particularly in multi-family buildings, which may allow chemicals used and mold spores to be introduced into ventilation systems, exposing other residents.

… Since these operations may go undetected, an unsuspecting family buying the residence at a later date may be put at risk of adverse health effects due to residual mold contamination.

And then there are children. Martyny reported that he and his research teams found grow operations in homes where children lived — and he minced no words:

“I personally would consider it child abuse,” he said. “Children living in an atmosphere like this are very likely to develop asthma and pulmonary disease they will carry for the rest of their lives. …I would be happy to testify for the district attorney’s office (that) the dangers are too significant to have children be in the grow ops.”

While Martyny’s research in Colorado focused on indoor marijuana grow operations, he said the same environmental harms could result from cultivation of similar densities of any plant, such as tomatoes or snap peas. But hardly anyone grows veggies in their basement. And while marijuana is legal to grow for medical purposes outdoors in Colorado, growers typically opt not to do so for several reasons. Chief among them:

Martyny’s research is well respected in law enforcement circles. He has studied the environmental impact of illicit substance production — especially marijuana and methamphetamine (so-called “meth labs”) — for law enforcement agencies in Canada and the United States for more than a decade. First responders and officials charged with investigating and removing elements of indoor drug operations have experienced health problems from their exposure — one Colorado law enforcement officer was hospitalized in critical condition because of his work in a marijuana grow house — and also worried about long-term health risks associated with their work. Martyny’s research on indoor marijuana grow operations in Colorado — funded by a Justice Assistance Grant and money from Colorado’s police and sheriffs’ associations — also resulted in recommendations about how law enforcement officials should dress, equip and otherwise protect themselves while working in such environments.

A side note of observation/analysis from me: I realize marijuana legalization proponents will look at these findings and say, “See? We need to make this stuff legal so we can take it out of houses, apartments, condos and office buildings and put it in big industrial warehouses in commercial business districts. Communities need to set their own rules and regulations! They can decide for themselves how they want to kick these grow operations out of neighborhoods and office buildings.”

These are also the same legalization champions who are running around, telling everyone that if Amendment 64 passes, law enforcement authorities wouldn’t be able to criminalize people for possessing small amounts of the drug and using it at home. They’ll have to devote their law-enforcement resources elsewhere, we’re told.

Even if a grow operation isn’t a small amount of marijuana — which it most certainly isn’t — if the drug is legal, you can, indeed, bet that people will absolutely test any and all limits set by municipalities and counties. After all, they currently do — but, with legalization on their side, drug users and addicts will test the regulatory bounds of your county, your city, your neighborhood — and your neighborhood home association — like you have never seen. And you will pay for these legal skirmishes and the increased enforcement.

Many Coloradans haven’t begun to consider the regulation that would need to accompany marijuana legalization. They haven’t considered all of the regulatory frameworks that would need to be built to protect public health and safety — and I can assure you that Amendment 64 doesn’t begin to pay for any of it. Not even close. (I can’t wait to see where Colorado is going to find the money to pay for its scaled-down equivalent of the U.S. Food and Drug Administration just to regulate pot …)

With marijuana legalization chiseled into Colorado’s state constitution, law enforcement agencies will find it far more difficult to address the marijuana-related problems that stand to affect you, your family and your household. And your home’s value? Good luck with that.